Posted 11 months ago | by Catoshi Nakamoto

The Bank Of International Settlements (BIS) or the central bank for the world has now expressed that its fully backing at least 56 countries developing a Central Bank Digital Currency (CBDC.) Recently the BIS has been heavily discussing how cryptocurrencies should be integrated into the world markets, but they aren’t talking about Bitcoin, Ethereum, and other more decentralized digital assets. They are referencing integrating CBDCs into the world economy and this will in part come in the form of DEFI (Decentralized Finance) utilized by the banks turned into CEFI (Centralized Finance) leveraging blockchain technology. 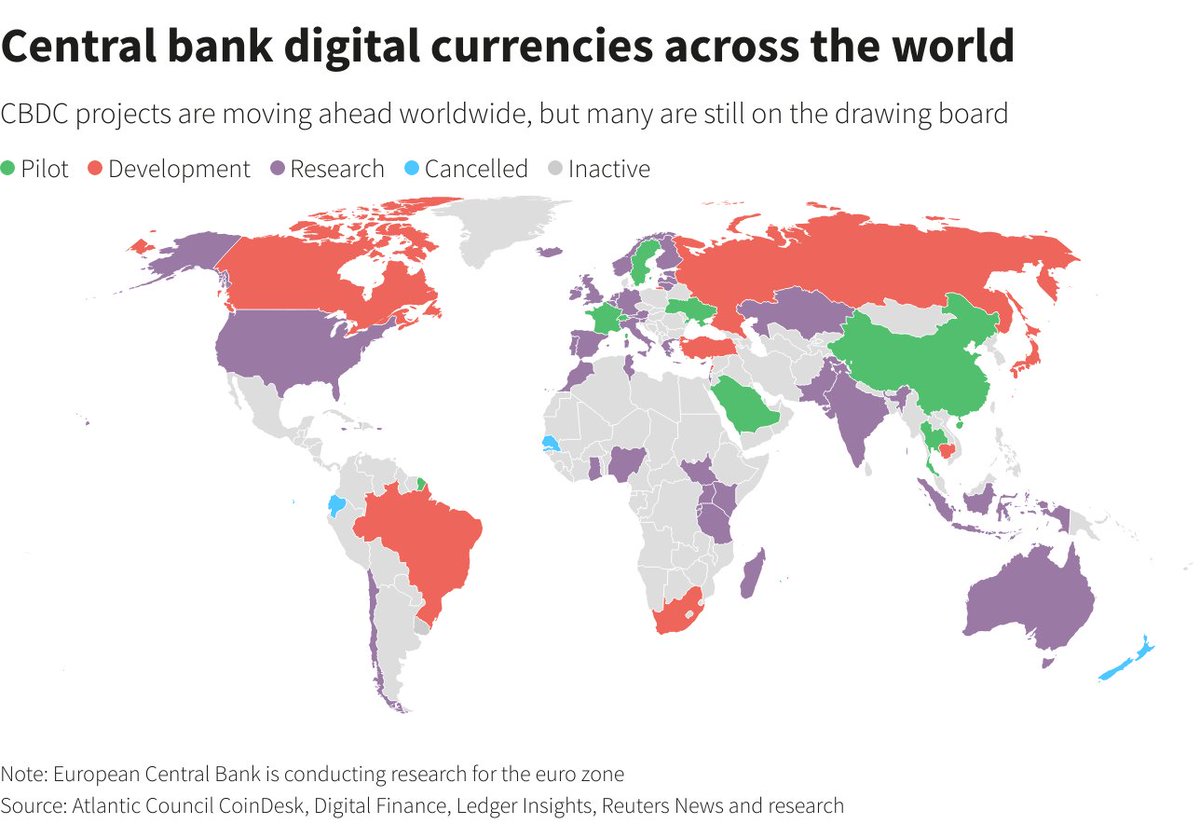 The first, pre-released chapter of the #BISAnnualEconReport is now out and it’s about #CBDCs. To find out more, read here https://t.co/aZZ3mztlJg pic.twitter.com/enurCz8y40

In fact, Bitcoin, Ethereum, and any asset not controlled by the powers that be inside centralized institutions have been being smeared by these entities as they finally all but officially admit that they have lost control of the money printer and monetary policy. The old financial world is collapsing and a new one is being built with digital assets, but it’s not just the payment method that is changing, many digital assets are building entirely new structures with smart contracts, or leveraging blockchain DLT (Decentralized Ledger Technology) for existing systems like supply tracking with $VET and $DOCK discussed extensively in detail on Bitboy Crypto as another example.

The Bank of International Settlements (BIS) includes 600 members of international financial institutions who represent the central banks of 60 countries.

According to the recent BIS report, there are currently 56 known countries putting efforts towards developing a state-run digital currency. This includes countries that are actively researching and developing their own CBDC, Reuters reported.

In addition, there are already some nations that have already deployed state-run digital currencies for testing purposes. Just this week, France, Israel, Palestine, and Nigeria, have announced interest in CBDCs or ongoing tests. Meanwhile, the Bank of France and SEBA Bank a Swiss crypto bank tested the settlement of securities using a CBDC as well this week.

In addition, if that’s not enough, earlier this month the Bank Of Thailand (BOT) tapped German technology company Giesecke+Devrient (G+D) to aid in the development of a central bank digital currency (CBDC) prototype. Around the same time, it was also announced that Sweden, has expanded its test of its E-Korona to real-world test environments after a successful test run which Bitboy Crypto covered.

The BIS considers CBDCs the “heralding of a new chapter on monetary development in history,” as per the headline on the press release of their Annual Economy Report. The organization warned that Central Banks must ensure “Big Tech” does not take control of money away from governments.

Other countries like El-Salvador and Paraguay have begun instead going with Plan-B proposing bills to declare Bitcoin itself as legal tender which would surpass Central Bank Digital Currencies (CBDCs). However, Bitcoin is far too slow to handle such a large amount of transactions on a daily basis and the fees on the network would be astronomical without a scaling solution like the Lightning Network. On the other hand, the Lightning Network protocol requires a channel of communication to be open to accept payments between two people, and it’s not user-friendly in its current state.

China is the furthest ahead of all nations getting ready to roll out its CBDC after numerous isolated tests in its cities. China wants to use its CBDC as a taxation instrument and all forms of digital payments utilizing the blockchain after years of tests on many levels of its financial infrastructure. Although China wasn’t the first country to roll out a CBDC, that award goes to the Bahamas who is 2019, released their Sand Dollar.

But we shouldn’t let China get too far ahead because in the words of Fortune magazine, “digitization of currency will be perhaps the most important factor in an economy’s success,” and “China is winning the digital currency battle by a long shot—and if the U.S. doesn’t catch up soon, it’s going to lose the war.” The race is now on for what country will be next to implement a digital currency and more so which central bank will be the first to digitize a sovereign fiat-based currency.

The U.S. and Federal Reserve chairman Jerome Powell has said they are in no rush to develop a CBDC and the country is currently focused more on research than the development of a digital fiat counterpart, as Bitboy Crypto has previously reported. Powell’s better half in the EU, European Central Bank, head Christine Lagarde, has taken a more stand forward approach stating last year that the bank would potentially reach a decision on releasing a digital euro early this year. However, that has yet to come to head thus far.

If we aren’t careful we will be allowing governments worldwide to have more oversight and control over our money than was ever possible, knowing every single thing that we purchase, if privacy isn’t a factor in the future of digital payments. This writer and researcher has previously highlighted through Bitboy Crypto that Wall St and the big banks have already tested digital cash settlements going back as far as 2016. This secret Wall St digital cash meeting included the likes of — more than 100 executives from some of the world’s largest financial institutions including — Nasdaq, Citigroup Inc., Visa Inc., Fidelity, Fiserv Inc., Pfizer Inc. and others, gathered for a private meeting at the Times Square office at the Nasdaq. It was during this meeting that the executives tested digital cash and settlements. Four years later, about on track with the amount of time it takes to observe new innovations and develop technology, we are seeing many of these major companies jumping into blockchain and cryptocurrency.

Speaking of VISA, the payment company recently partnered with an Ethereum-based stablecoin project USDC to integrate the digital asset for payment for its more than 60 million-plus merchants as Bitboy Crypto reported. Similarly Mastercard its competitor has also discussed Central Bank Digital Currencies, with its CEO Ajay Banga; stating that he was bullish on CBDC technology.

These same banks admittedly like Citi Group for instance have said that they are working directly with governments on helping create CBDCs. Last year, Wells Fargo also publicly declared its interest in digital currencies with a report entitled: “Let’s Get Digital: A Briefing on Central Bank Digital Currencies.” One year prior in 2019, Wells Fargo announced that it would pilot its own digital currency powered by blockchain to help move cash across borders and between branches in real-time.

The joint report stated “foundational principles and core features” for central bank digital currencies (CBDCs) and how they should be designed. These three principles are as follows.  First, a CBDC should work adjacent with cash and other current payment types “in a flexible and innovative payment system.” Second, a CBDC  should support “wider policy objectives” and “do no harm” to monetary and financial stability. Third, a CBDC should “promote” innovation and performance.

As world leaders smear Bitcoin for its energy usage and try to push the narrative that “Bitcoin is dead,” for the umpteenth time, they are slowly but surely rolling out CBDCs. This is the last death throes of a dying financial system that is controlled by centralized institutions and they are grasping on for dear life, ironically HODLing. As for us, we could become just a decimal in the system from the technology we all embraced seemingly used against us, to further enslave us.

CBDCs won’t be private, limited in quantity like Bitcoin, and are guaranteed to be a new way to be plugged into the state surveillance apparatus. If you want to give up all your control, all of your data, allow monitoring of all of your purchases and risk having your ability to transact turned off with the flip of a switch by all means embrace CBDCs.